Why Emre Can will benefit the most under Jurgen Klopp

Emre Can came to Liverpool last season on the back of promising performances for Bayern Munich and Bayer Leverkusen. Indeed, the Reds were able to beat out stiff competition from Bayern, who had a buy-back clause for the German international.

Known for his versatility, Can came to Liverpool and had a very promising debut season, reveling as a right centre back in Brendan Rodgers’ 3-4-2-1 formation. Can was able to bring the ball out of defence and instigate attacks with consummate ease. 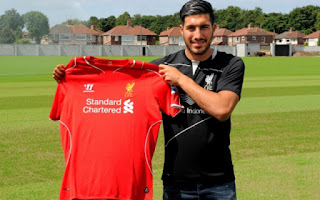 However, his downturn in form started with the 4-1 thrashing against Arsenal last season where Can was forced to play in a highly unfamiliar role at right back. He struggled immensely, failing to deal with Arsenal’s pace on the break and was eventually sent off.

But even after he came back, Rodgers continued to play him in the right back position and teams started to take advantage of it. Can’s confidence started to dwindle rapidly and by the end of last season, Can looked a defeated man as he barely tried against Marko Arnautovic in the humiliating 6-1 defeat against Stoke.


Read more »
Posted by Unknown at 06:59 No comments: Links to this post

What has happened to Jordon Ibe this season?

Liverpool fans entered the season with the hope that Jordon Ibe, a rising star of last season would kick on and fulfill his potential. Fans started the season thinking that Ibe would be the successor to the departed Raheem Sterling. Indeed, there were comments from many optimistic Liverpool fans about how Ibe was “twice the player that Sterling was”.
But, things have not turned out right for the 19 year old, as performances have been dull. Ibe has not been able to make the impact that everyone hoped he would create.This article takes a look at why this has been the case. Has he become a bad player overnight or is there some other problem behind the scenes?

Read more »
Posted by Unknown at 12:17 No comments: Links to this post