Phillipe Coutinho – The Brazilian Magician Is Finally Becoming a Match-Winner

It was two seasons back that Phillipe Coutinho stepped through the doors of Melwood as Brendan Rodgers’ second and last January signing. Nobody knew what to expect from him back then. He was one of many Brazilian technicians and had frankly failed during his time at Inter Milan. He went down as one of many mistakes in former Liverpool manager Rafa Benitez’s ill-fated run at the Italian club. He was regarded as a calculated gamble with only 8.5 million dished out on him so the risk and pressure was not that high. But, there was still uproar in the Liverpool faithful at the time as the Reds neglected to buy experienced campaigners like Wesley Sneijder for a player who had not done much in the game.

But, Coutinho quickly put those doubters to rest scoring on his first Anfield start, which was a precursor of supposed things to come. What followed was a period of scintillating football from the little Brazilian including a world-class performance against Newcastle in a 6-0 victory at St. James’ Park. He left the Anfield crowd dazzled with his quick feet and keen eye for a pass. His teammates also took well to him as Coutinho formed a devastating partnership with fellow signing Daniel Sturridge including a game where Coutinho assisted 2 of Sturridge’s 3 goals. After a prolific pre-season, Coutinho was tipped to be the newest mastermind for the Anfield crowd to adore.

However, things did not go fully to plan in his first full season at the club with Coutinho struggling to score or assist in the first half of the season. This also coincided with a lengthy spell on the treatment table as the Anfield crowd was left hopeful that the Brazilian would capture his form back. In the second half of the season, Coutinho had established a reputation of a player who can dazzle but blew hot and cold. This was apparent as world-class home performances against the likes of Arsenal and Everton were cancelled out by stale away performances against the likes of West Brom and Norwich. Coutinho was playing well but the feeling from the Kop was that he was not ready yet. But, Coutinho was still one of the mainstays in the Liverpool team that nearly took home the title.

This season started with Coutinho staler than usual. While he was inconsistent before, Coutinho started this season with very insipid and dull performances. He was not himself and gave the ball away on numerous occasions. It was palpable to see that Coutinho was unhappy on the pitch. As a result, Brendan Rodgers dropped him from the Liverpool squad during a spell where the Reds struggled and struggled massively. It was no coincidence that Coutinho’s lack of form met with Liverpool going on their worst run in 24 years. There was obvious discontent from Liverpudlian’s at Coutinho’s dull performances and at one point, many of the fans wanted Coutinho to be sold.

But, like many other players this season, Coutinho came back from his period out a stronger and revitalized man. The dazzling skill and outrageous passing was back and there was excitement on his face again. His confidence was coming back and he took on players with gusto and fervor. Before he would go for the easy sideways pass but now he looked to take on his man and beat him. Things were finally looking up for the Brazilian but those doubts of inconsistency were still there. Coutinho gave leverage to the doubters with a poor scoring record as he kept on rushing shots without putting much thought. He was still not regarded as the match winner Liverpool sorely lacked since Luis Suarez left.

However, in the past month, Coutinho has added that element to his game with his shots hitting the target more often than not. Coutinho has now become Liverpool’s most important component. It is not just the goals he is scoring but it is the sheer value of those goals. Coutinho has already netted a stoppage time FA Cup replay winner and his propensity for the outrageous has increased. Now, he does not hesitate when shooting and is actually confident. Guilty of overplaying the ball before, Coutinho is now very decisive in his thinking and rarely makes the wrong decision. He is now controlling games when before, he was just hoping to be involved. This can be seen in his performance against Man City. He had 72 touches and was an ever-present in the attacking third as the heat map shows. 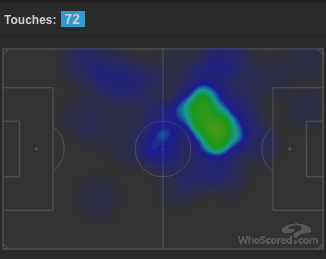 This can also be seen in his performance against West Ham where he got two assists, allowing Raheem Sterling and Daniel Sturridge to run riot. 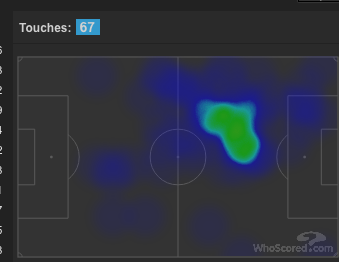 Coutinho has definitely taken his game to the next level and while his bad form led to bad results, his transformation has in turn led to Liverpool’s resurgence. Coutinho is currently Liverpool’s best and most important players and now he has added match-wining goals to his arsenal. What was revealing to see was that Coutinho did not look surprised when his shot against Man City went in when before he would like last season against the same team. It is vital that Coutinho keep grounded. Humility is the key now forward and complacency is the only restraint on Coutinho’s progress. Otherwise, even the sky might not be the limit for where Coutinho can go.